Someone pointed out some alterations to the Book of Common Prayer (BCP) that made it depart from the tradition of the Church in what seems like inexplicable ways. This was news to me, but when I looked into it, I found it to be true. The changes noted are:

[1] The text of the Sanctus was altered from what the Church has always used. The traditional Sanctus runs as follows (taken from the Sarum Missal in English): “Holy, Holy, Holy, Lord God of Hosts; heaven and earth are full of Thy glory. Hosanna in the highest. Blessed is He that cometh in the Name of the Lord.”

This last bit from ‘Hosanna’ to ‘in the Name of the Lord’ is known as the Benedictus and it is absent from the BCP from 1552 until recently. The Benedictus was included in the 1549 edition and removed in the 1552 edition. Here is the 1552 text:

Holye, holye, holye, Lorde God of hostes: heaven and yearthe are full of thy glory: glory be to thee, O lord, most high. 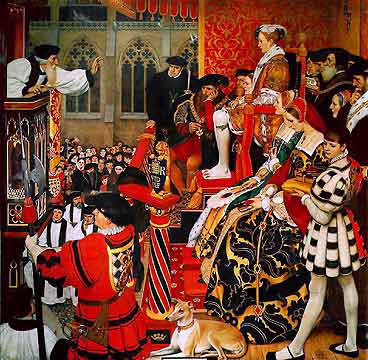 Even the venerable 1928 edition preserves this change. So why was it made? I dug through some old books looking for an answer and this what I found: It may have been removed due to a Medieval abuse or simply because it is not a part of the Angelic chant from the Bible – it is a mashup in other words. I found this in “The Annotated Book of Common Prayer,” edited by Rev. John Henry Blunt, Rivingtons, London, 1866, pages 183-184:

In the Primitive and Mediaeval Liturgies the Sanctus concluded with the words, “Hosannah in the highest, blessed is He that cometh in the Name of the Lord, Hosannah in the highest.” In translating it for the Office of our Prayer Book, the four later words were changed to “Glory to Thee, O Lord, in the highest;” and the present termination was substituted in 1552, thus displacing the Hosannah altogether.

No reason can be assigned for this deviation from ancient custom. But there was, perhaps, some popular superstition, now lost sight of, which made it seem desirable to drop the words in question. The Mirror of our Lady [A.D. 1530] comments upon the Sanctus as then used in the following words: “This song Sanctus is the song of Angels, and it is said to the Blessed Trinity, as is said before in the hymn Te Deum at Matins. The second part thereof, that is, Benedictus, is taken from the Gospel, where the people on Palm Sunday came against our Lord Jesus Christ, and said to Him the same words in praising and joying of His coming. And so they are sung here in the mass, in worship of our Lord’s coming in the Sacrament of the Altar. And therefore at the beginning of Benedictus ye turn to the altar and make the token of the Cross upon you in mind of our Lord’s Passion, which is specially represented in the Mass.” [Mirror, f. cixxxviii.] It is not unlikely that the last period of this comment gives an indication of the reason why the change was made. A more satisfactory explanation that may be given, however, is that the Benedictus is not part of the song of the angels, and is therefore inconsistent, strictly speaking, with the words of the Preface.

So these are two conjectures that seem plausible as to why it was removed. For all the problems with the 1979 edition, it does restore the Benedictus in both Rite I and II. The AMiA/Peter Toon “An Anglican Prayer Book” also restore the Benedictus, although in a more marginal fashion. This leads to the second omission:

[2] The BCP omits the holiness of the church in the Nicene Creed. Where the Creed says: “And I believe in one holy catholic and apostolic Church” the BCP drops the word “holy.” The 1559 says: “And I beleve one Catholike and Apostolike churche.” From 1549 on it is the same. Why did this happen? Well, it appears that Archbishop Cranmer and the other revisers believed the word holy to be an addition to the earliest forms of the Creed based on manuscripts available in their day and so removed it. From “The Nicene Creed,” by the Rev. A.E. Burn, Edwin S. Gorham, New York, 1909 pages 47-48:

That he should insert the word ‘holy’ when quoting from the Apostles’ Creed, makes it more noticeable that he omits the word in the Nicene Creed. There can be no question that this was due to the omission of the word in the texts of the Creed given in early editions of the Councils, which he consulted. We are now in a position to prove that the omission was characteristic of the old Latin text both of Spain and Rome, and also, apparently, of the text used in the Church of Constantinople. Why it should thus differ from the text of the Jerusalem Creed of S. Cyril, and the Creed of S. Epiphanius, has not yet been discovered. The Reformers followed the best text which they could find, but the omission is none the less to be regretted, since ‘holy’ was a note of the Church in the Baptismal Creed from the earliest times.

An article on the subject is found in this collection.

5 thoughts on “Omissions from the Book of Common Prayer”